"How can I be sure I'm buying Crimsafe?"

There are 5 ways to be sure.

1. Crimsafe is exclusively distributed by the approved licensees listed on this website. Approved licensees may also wholesale Crimsafe to approved reseller outlets. Search for your nearest licensee by using our postcode locator above and look for their accreditation in their showroom or ask them to provide their credentials during your in-home inspection.

2. Call Crimsafe on 1800 688 188 and query the name of the business that has offered to sell you Crimsafe products. We can tell you in short order whether or not the person you're dealing with is an approved licensee.

3. Look for the Crimsafe badge. A Crimsafe badge is physically clipped onto the upper left or right corner of your installed security screen giving you the assurance that your screen is a genuine Crimsafe screen installed by an Authorised Crimsafe Licensee.

The badge also acts as an extra deterrent to intruders scoping the neighbourhood looking for a property that will allow quick access. By identifying you have Crimsafe security screens miscreants are more likely to move on to an easier target.

5. Crimsafe licensees use a type of installation screw that is unique to Crimsafe, so that burglars cannot simply unscrew your screens from the wall. Each drill bit used to screw them in is tracked by Crimsafe's head office to ensure they're only used by licensed manufacturers and authorised resellers.

How Strong is Crimsafe?

Crimsafe is the strongest stainless steel security mesh on the planet.

Imagine a screen that will not breach under an attack with a timber sleeper, that will resist being cut open with a knife or will take an impact of cyclonic proportions. Crimsafe can.

It passes with ease tests that cause others to fail. Take the Category 3 Cyclone test which is not an Australian Standards test - it's much tougher. A 4 kilogram block of wood is fired at the security screen. At impact it is travelling at 15 metres per second.

There's no doubt that it leaves a dent in the mesh. But other frames simply fly apart - exploded by the impact whereas Crimsafe doesn't budge.

There's an even tougher test that our mesh and our commercial frame system passes...the Category 4 Cyclone Missile and Ballistics test.

Test Part 1: A 4kg piece of wood is smashed into the screen at 20 metres per second. This is the equivalent of 72 kilometres per hour. The impact is deafening. The force is incredible. But the mesh does not break.

Test Part 2: 5 steel balls, each weighing 2 grams (almost as much as a .22 caliber bullet) and almost a centimetre in diameter are fired at the mesh at 108 kilometres per hour - 30 metres per second.

The results are incredible. The mesh is sorely abused but it still holds strong within the frame.

We've recently put our mesh and competitor samples bought straight from licensed manufacturers through a pure impact test, to see just how hard an impact each can withstand before breaking. In the coming weeks we'll post a video to this page that shows you how we performed.

In 2009 the University Of New South Wales School Of Aerospace and Civil and Mechanical Engineering (now School of Engineering and Information Technology) at the Australian Defence Force Academy (UNSW@ADFA), at the request of Crimsafe, designed a rigorous scientific test to determine exactly how much force Crimsafe screens can resist from an impact before breaking. We also tested stainless steel security screens bought directly from 9 leading competitors.

Of the competing brands tested 6 failed to meet even the current minimum standard of impact resistance as required by the Australian Standard AS 5039 2008 and Methods of Testing AS 5041 2003. These screens are leading brands and many broke before withstanding even the basic requirement of 5 impacts of 100 joules of impact energy!

The results clearly showed that Crimsafe security screens were by far the strongest on the market. Watch the video of the original 2009 tests below. 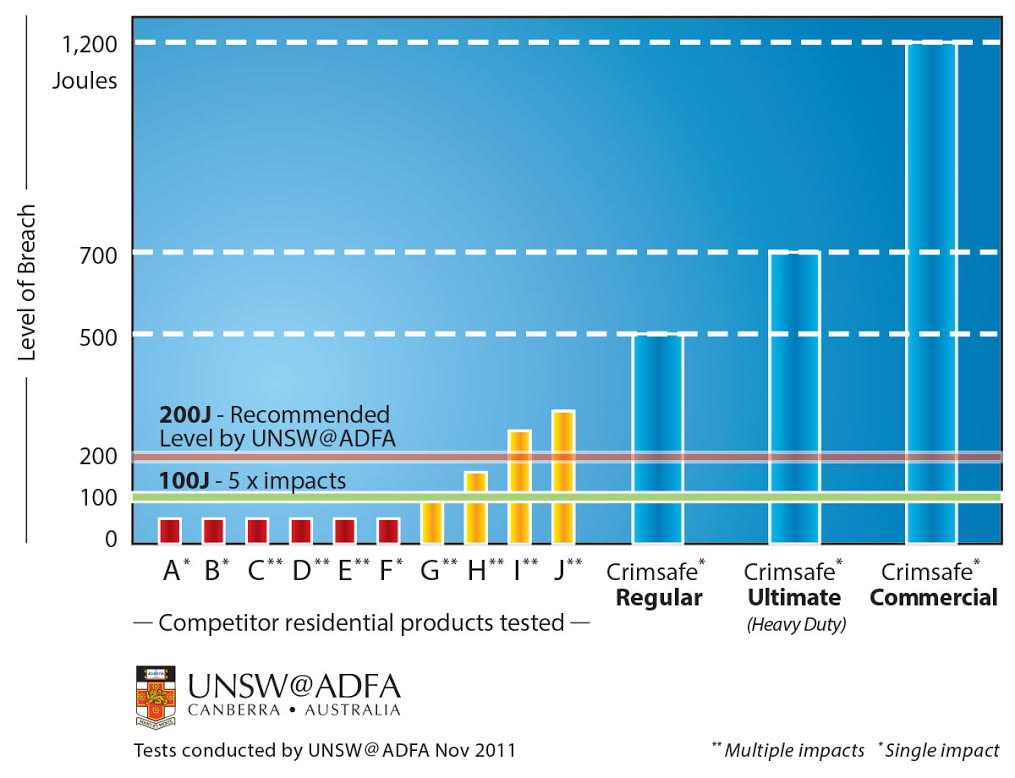 The above graph shows how Crimsafe screens out performed the competitor products.

In 2011 Crimsafe repeated the tests using new samples from the same security screen companies plus an extra product from a company not included in the 2009 tests.

Our base product range, Crimsafe Regular, passed a minimum of 500 joules in a single impact!

So - how strong are the security screens on your home?

This is important because the first kick or hit on your security screen from an intruder is usually their hardest, and delivers the most energy. The more they attack the screen the less energy they can impart.

For this reason you need a screen that can withstand an impact of at least the same level of energy discharged by the initial force of aggression delivered by an intruder. Crimsafe is the security screen proven to hold fast against an attack of this level.

Watch the video at the end of this page to see 3 competing brands fail to withstand the basic impact equivalent of the Australian Standard: 5 x impacts of 100 joules.

In the Australian Standard AS5041 2003 - Methods of Test, the Dynamic Impact Test simulates the effects of a human impact against a security screen door or window grille by allowing a standardised weight to swing against the test specimen 5 times. Each impact is about 100 joules of energy. That's roughly the impact force imparted by a child stumbling into a glass door and in fact, the test was originally designed for the glazing industry so they could make glass that didn't shatter upon a small impact.

Unfortunately, 100 joules is a lot less force than a motivated burglar can deliver. After the testing in 2009 we requested the scientists conducting the test to make a recommendation on the level of impact resistance that the Australian Standard should require, and they put the figure at 150 joules and 10 impacts if the burglar kicks the door and 200 joules if the burglar is able to use an implement such as a baseball bat or brick.

Yet 6 of the competing brands that we tested failed to meet even the current minimum standard of impact resistance. These screens are leading brands and they broke before the test delivered 100 joules of energy in an impact!

From our perspective it is very disappointing that the Australian Standard doesn't require better performance of security screens. In fact, in most cases, the word 'security' should not be associated with these screens as most fail to deliver adequate protection against one of the most common methods of entry: a well-aimed kick.

We tested three types of Crimsafe product: our regular range, our heavy duty range and our commercial range.

Our regular Crimsafe screen withstood up to 500 joules of impact energy in a singular impact. That's twice as good as any competing screen and 5 times the impact level the current Australian Standard requires.

Crimsafe Heavy Duty withstood 700 joules of impact energy in a singular impact. Seven times higher than the impact level that the standard requires.

Our Commercial screen withstood 1200 joules of impact energy in a singular impact! That's 12 times higher than the impact level required by the Australian Standard and nearly 5 times more force than any competing screen can withstand.

Watch the video below of the original 2009 tests with the sound up and you'll get a good sense of the enormous power delivered by a 1200 joule impact - an impact which Crimsafe successfully withstood.

Choose from a range of colours to match your style

Crimsafe products come in a wide range of standard colours with almost any customised colour available on request. Woodgrain and anodised finishes are also an option for seamless integration into various home styles.

Other products in the Crimsafe Range

Crimsafe Regular
Essential protection for your home and family 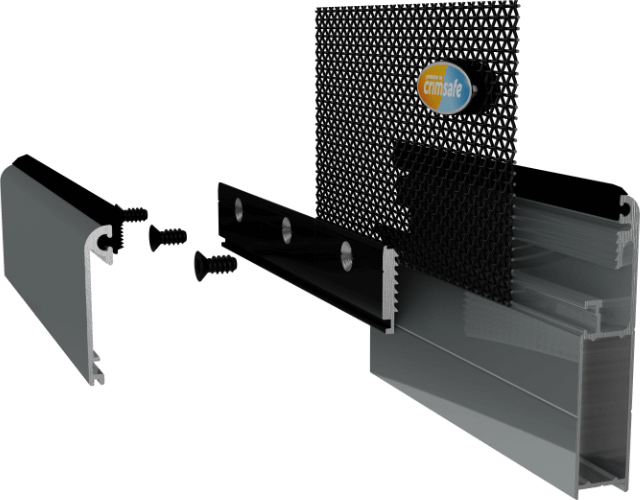 What makes Crimsafe so strong?

The combination of Crimsafe's unique Screw-Clamp™ technology and Tensile Tuff® Mesh makes all the difference. They work together to absorb and disperse impact, giving Crimsafe exceptional strength and the ability to withstand tremendous force.